I use a 2009 MacBook Pro for as much of my work as possible, but the one thing I can’t run on my Mac are my research simulations. For this purpose, I have a screaming Windows 7 box in my office.

My house is divided. Here’s a photo of my setup: 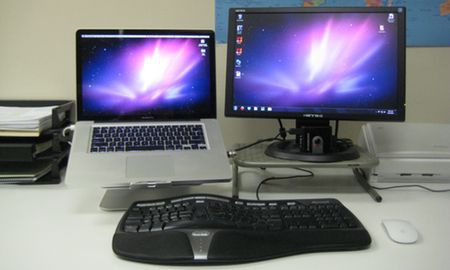 I initially ran into a lot of friction when constantly switching between these two machines. To make matters worse, I have my ergonomic keyboard KVM’ed between both machines—this further blurs the line between OSX and Windows (which machine am I typing on?). Something had to give.

To help my fellow man, here are the modifications I made to my Windows 7 box to make it more Mac-like. My goal was to keep modifications minimal—I’m not trying to turn Win7 into OSX, just replicate my most common functionality so important things work the same.

Switch the Ctrl and Alt keys (and more)

I fell in love with the Command key on my Mac because for the first time, I was using my left thumb in a productive way. Switching these keys on Windows allows Ctrl+? to match Cmd+? on your Mac. Furthermore, this doesn’t affect Ctrl+Alt+Del. The other modification I made is to map Ctrl+Q to Alt+F4 to kill applications.

Now your most-used Mac triggers work on your Windows machine.

Use an Application Launcher Invoked by the Same Triggers

I don’t use the Dock on my Mac. Everything is launched using a program called LaunchBar. I hit Cmd+Space, a little dialog pops up, and I start typing the name of the application I want to run until it narrows down the list to what I want.

On Windows, I installed a free app called Launchy that replicates the basic functionality of LaunchBar or Quicksilver on the Mac. To invoke Launchy, I type the trigger Cmd+Space (remember these two keys are now adjacent since we switched Ctrl and Alt)

Set the same Desktop Image for Both

See above image. This one may be silly, but I like it because I feel more at home. Straightforward enough for anyone reading this blog to execute.

All my working files get synced between Mac and Windows using Dropbox. I try to maximize interoperability by using apps that run on both platforms when I can. This means I post-process all data in Python, store research notes in Evernote, browse the web with Chrome, and store passwords in 1Password. Obviously great web apps like Gmail make interoperability less frictional.

If you regularly use both a Mac and a PC—and even if you aren’t a typography geek—you will notice how fonts often appear spindly on Windows in comparison to what you’re accustomed to on OSX. Here are instructions on how to improve font rendering in Windows.

So those are the minimal things I decided to change on my Windows machine to take advantage of my Mac muscle memory. Keep in mind—I’m not trying to turn Windows into OSX, just make life a bit easier.

If you really want to take this to the nth degree, you should definitely check out Lifehacker’s articles on mimicking Mac functionality on Windows as well as re-skinning Windows to mimic Snow Leopard.